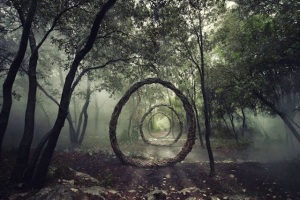 Tree people arrived on the planet Earth to make contact, travelling through space from beyond the rings of Saturn. Travelling through the dark matter invisible to the human eye, they came through a maze of wormhole tunnels. Circles are very important to the tree people’s culture, as important as the rings running through a tree trunk recording the age of a tree.

Firstly they announced their arrival by crop circles with alien diagrams, laid out on many farms and fields, these went unrecognized and were ridiculed by the inhabitants of Earth.
They recruited weaver birds to weave and construct special rings of tree branches that were then energised with power from the invisible dark matter that surrounds everything in the known universe. Each ring was constructed and linked to another dimension, any person entering a ring would instantly become invisible as they travelled and entered this dimension able to travel through time and space, never to return. Many of the top scientific brains on the planet followed the route through the rings and fears were raised among the top echelons of society for their safety.
Then one fateful day, a human emerged from one of the rings and lived to tell a wondrous tale of life in a far-off paradise. When the danger of evil and violence threatened the alien visitors, they left very quickly. The survivor soon returned with some officials to the woodlands where the alien rings were situated, all he found was a fungal fairy ring of mushrooms.
All trace and evidence of the road to Saturn was lost.

7 thoughts on “Picture it and Write ~ Circular Reasoning”