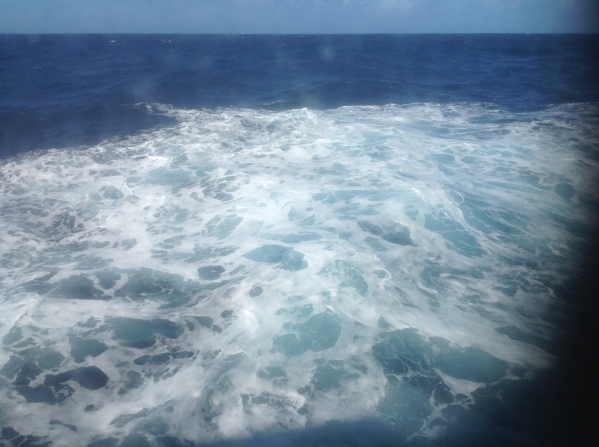 Share the story of a time you felt unsafe.

The most memorable time that I felt unsafe and insecure was a time when we were in the middle of the ocean, aboard a relatively small ship. We had experienced some quite strong winds, and there was a rough swell, that was rocking the ship a little. We were quite used to this traversing the Bay of Biscay.

On that memorable day we were eating a leisurely meal in the ship’s dining-room, I was sitting opposite my wife Margaret, with a view of the open sea through the windows on the side of the ship. The dining-room was quite high up, on the fourth level of eight, or nine if you include the open Verandah deck.

As I looked up, the windows in front of my viewpoint were underwater, literally underwater! Then within a millisecond or less, there was an huge shocking bang, as an enormous freak wave hit the side of the ship. The shock reverberated through the dining room, tables were thrown over and large metal serving stations were upended. There was the sound of crockery smashing everywhere and food and broken glass was scattered.   Several passengers were injured as the tables trapped people beneath them and the room was an area of total devastation.

All of the public rooms were affected and the damage to the fixtures and fittings was substantial. The passengers were ordered to return to their cabins as the clear-up began, we returned to find our television set had been ripped from the brackets that secured it to the wall. The maintenance department were obviously attending to the urgent areas of dangerously damaged fixtures and fittings.

We were confined to our cabins until further notice, and informed that our meals would be delivered to our cabins by the room-service staff. The Captain kept everyone well informed, of the ongoing situation over the internal tannoy system. The weather was still pretty rough and the seas were high but nothing to compare with the original freak wave that had caused such devastation. That was totally unexpected by the officers on the bridge and came literally out of nowhere.

We were confined to our cabins for almost two days, and for us that was the safest place to be. I certainly felt unsafe during those two days of high seas, and I was quite relieved when things were back to normal and our ship was sailing on calm waters into the sunshine.